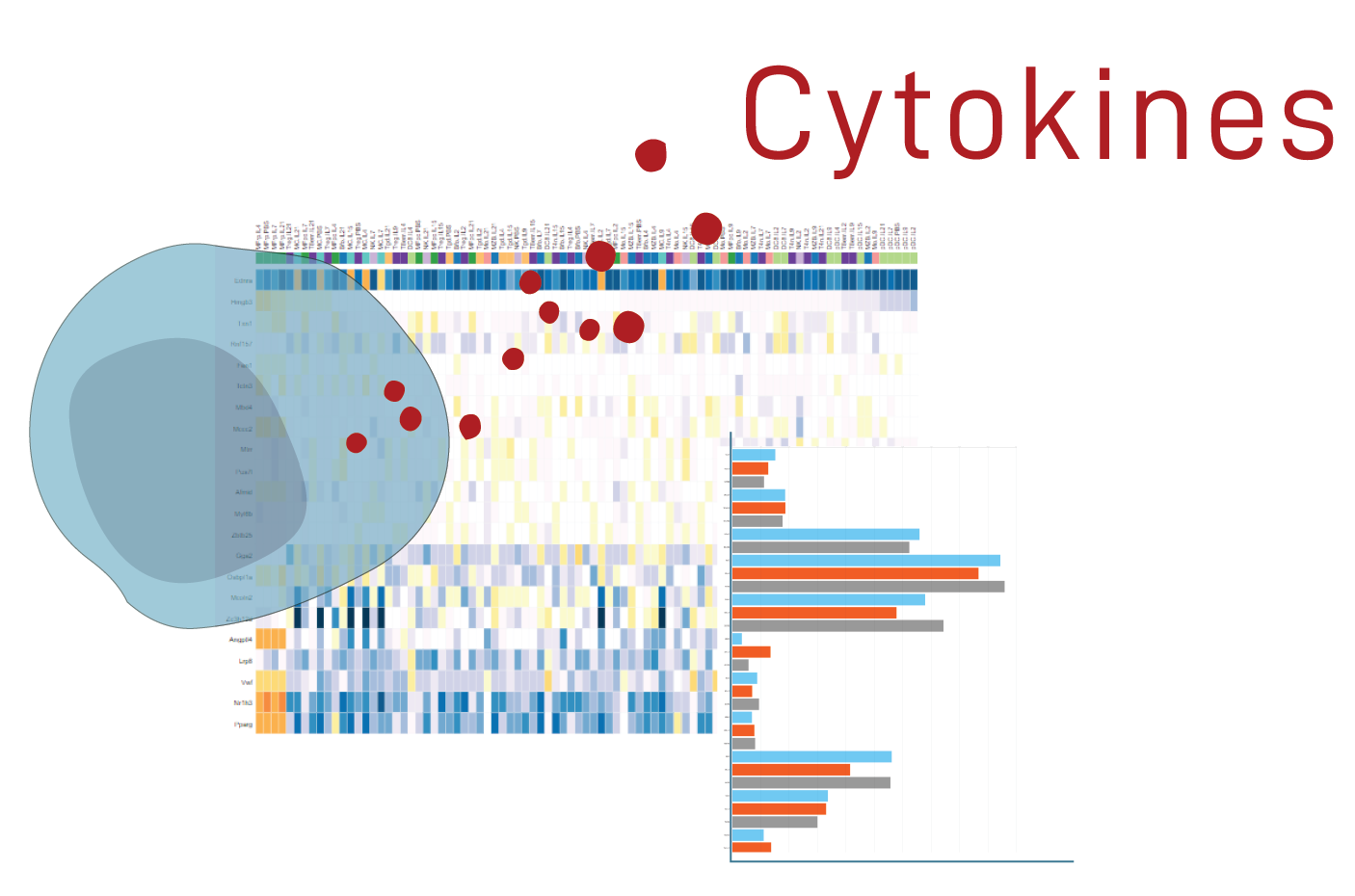 In keeping with ImmGen mission, Kumba Seddu, Alev Baysoy and Felicia Chen have generated gene expression profiles of the immediate responses to cytokines of the Common-Gamma-Chan family (IL2, IL4, IL7, IL9, Il15 and IL21), this across all immunological lineages represented in the ImmGen standard 14-cell-set. All responses were induced in vivo by systemic injection of free cytokine or of cytokine/Ab complexes, and responses profiled by RNAseq 2 hours pi (timepoint chosen to focus mostly on direct effects).
A deep analysis of the data (which revealed several unexpected facets of the CGC family) is being performed by an ImmGen data analysis team. As usual, the curated data are available pre-publication using the immGen databrowsers: Display cytokine-induced expression profiles across the ImmGen immunological cell-types for a selected single gene, or explore changes in your own set of genes through an interactive heatmap. 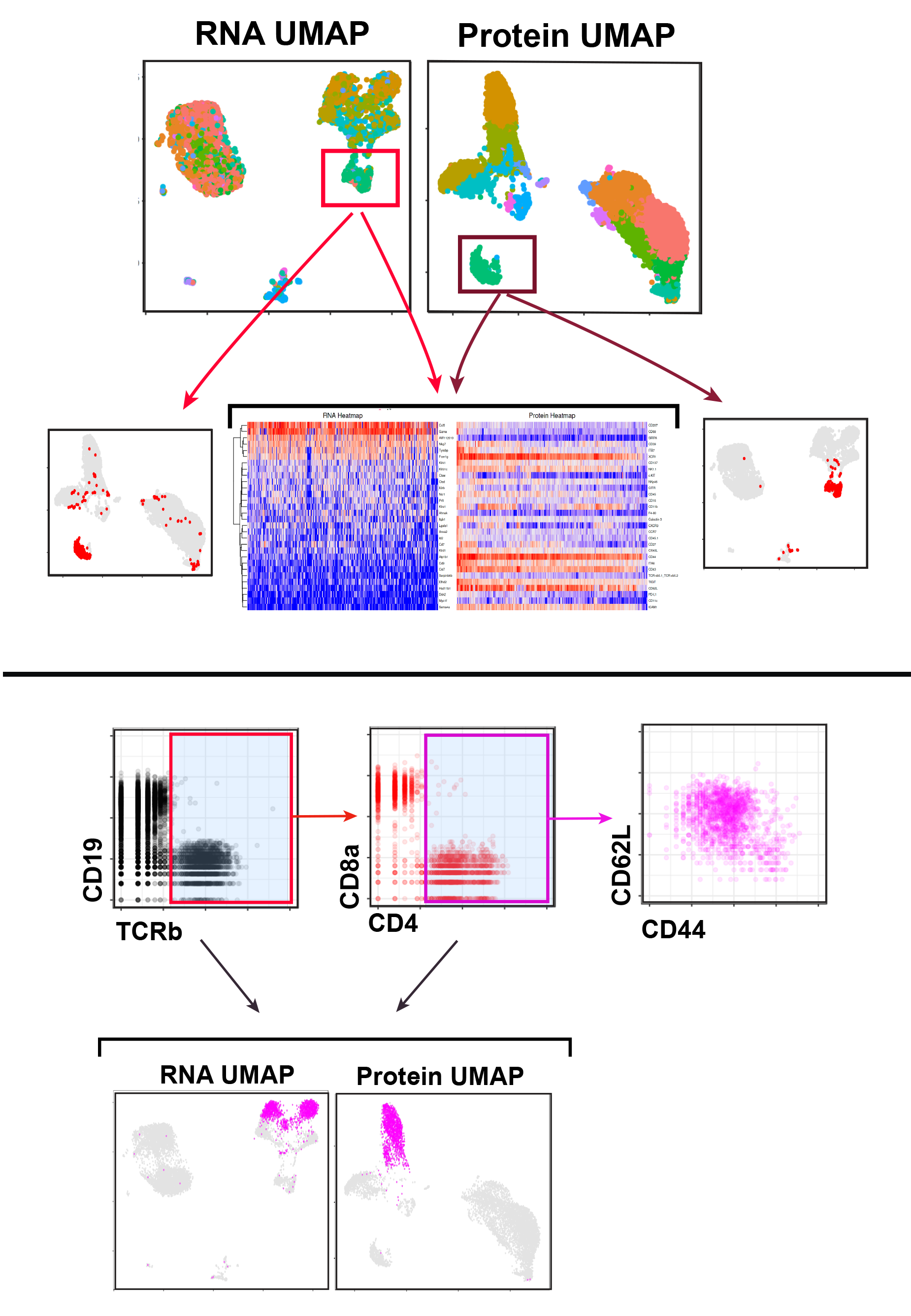 On the Heatmap tab, cells are grouped by dimensionality reduction onto two UMAP plots generated from either the RNA or protein data. They can be colored according to cell lineage or standard clustering. Selecting groups of cells on either the Protein or RNA UMAP will display their position on the other map, and also bring up new heatmaps that display the proteins and genes whose expression best characterizes the selected cells.
More data will be curated into the site soon.

The FACS-style tab displays three scatter plots familiar to immunologists, in which cells are displayed according to expression of two chosen protein markers. A selection tool is used to gate cells in the first panel(s), and these gates can be applied to show the position of the selected cells in the subsequent panels, and on the RNA and Protein UMAPs below.
The data shown in this first release represent whole mouse splenocytes (major immunocyte lineages are included). It was generated with 97 DNA-tagged antibodies against cell surface markers (TotalSeqC panel designed in collaboration with BioLegend). More soon…

*Named after the Rosetta stone, which also showed the same text in different languages. 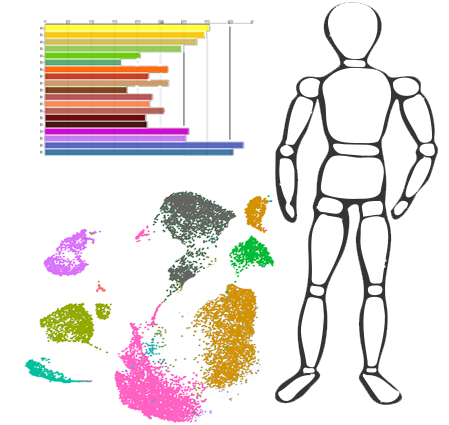 The ImmGen databrowsers are now used to portray externally-generated transcriptome data from human immunocytes.
The site has now been updated to include RNAseq data from the sister-project “Immune Cell Atlas”. Either as population RNAseq on the usual Skyline viewer (Angela Magnuson) or as scRNAseq (Michal Slyper, Julia Waldman, Angela Magnuson and Jerome Martin).
More data will be curated into the site soon.

Thank you to all ImmGen users for having been a part of the ImmGen story for the last 15 years.

Best wishes to all for a Happy(ier) New Year! 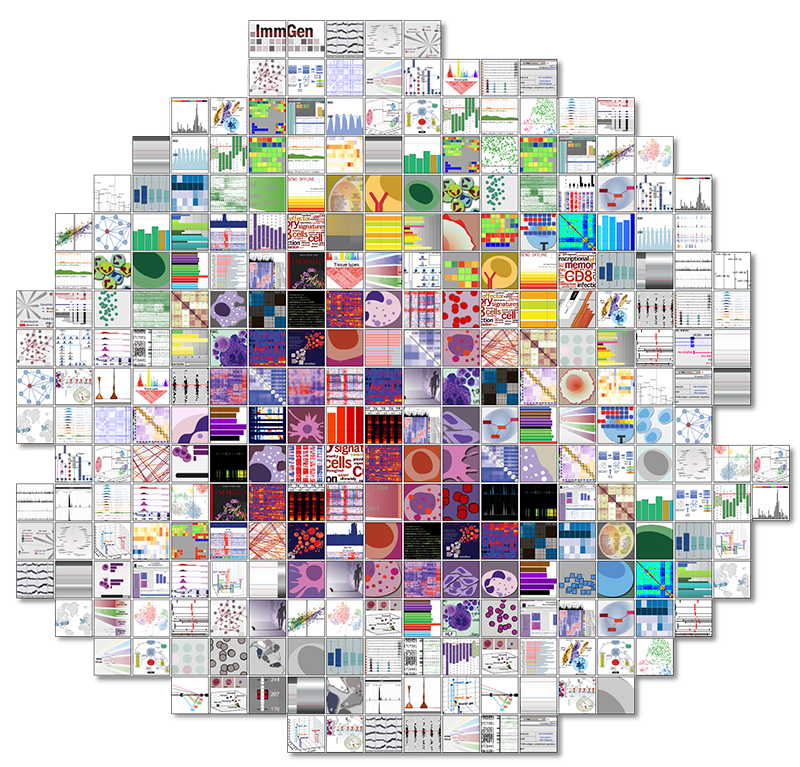 
Liang Yang has completely reworked the classic ImmGen Gene constellation browser, which shows the genes whose expression is most closely related to a query gene. Many many additional features and links. And yes in a non-Flash environment (for those who wondered… the ImmGen site is now officially Flash-free!) 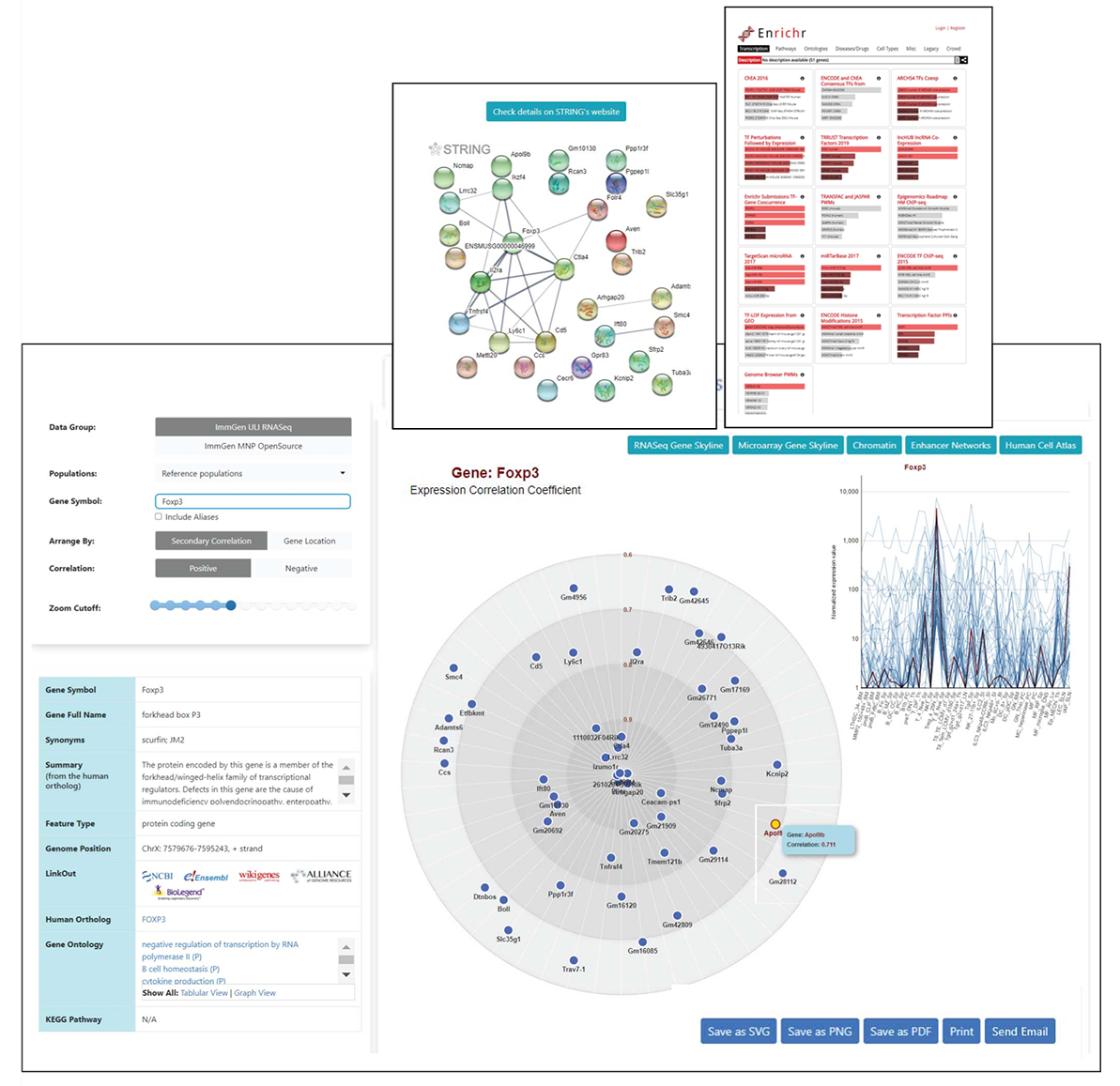 The Constellation databrowser presents the genes most closely correlated to a chosen gene, within ImmGen expression data. As in the original instance, users can jump from one gene to the next caution, can be addictive). The distance from the center representing the tightness of this relationship. Users can choose to organized these correlated genes by secondary correlation, or according to chromosomal location. The correlation can be calculated across the entire set of lineages (will tend to return lineage-specific transcripts) or within a lineage (more specific information). An interactive graph displays the actual expression values across the selected populations.

The new Constellation browser includes two important expansions for complementary followup analyses on the set of correlated genes:
- An interaction network visualization, thanks to the String database
- A rich search of GeneOntology, Pathway enrichment, regulatory connections, etc, thanks to the Enrichr project.

Please be aware of small discrepancies that may occur while comparing to previously downloaded data or figures. Changes are minimal for most genes, but M25 differs from M16 by introducing around 2400 new genes and 8000 new transcripts (for a total of 55401 total genes, of which 21859 are recognized as protein-coding). Many of them are microRNA precursors, others correspond to better distinguished members of gene families. The most significant “newcomers” are Vps28, Tmem179b, and Itprip (primarily expressed in Mast cells, Macrophages and Granulocytes, respectively).

ImmGen is updating the gene/transcript reference framework used to map and assign RNAseq data. Liang Yang has performed the herculean task of re-processing all existing ULI RNAseq data against GENCODE Version M25, from the previously used M16. This update applies to data on the “RNAseq Skyline”, "Population Comparison (RNASeq)" and "MyGeneSet" databrowser pages.
In addition, Gene tables for datasets deposited at NCBI’s Gene Expression Omnibus (GSE109125, GSE122108, GSE122597) have been updated to M25, as have the raw count numbers and normalized tables found on the ImmGen Dataset page.

Please be aware of small discrepancies that may occur while comparing to previously downloaded data or figures. Changes are minimal for most genes, but M25 differs from M16 by introducing around 2400 new genes and 8000 new transcripts (for a total of 55401 total genes, of which 21859 are recognized as protein-coding). Many of them are microRNA precursors, others correspond to better distinguished members of gene families. The most significant “newcomers” are Vps28, Tmem179b, and Itprip (primarily expressed in Mast cells, Macrophages and Granulocytes, respectively). 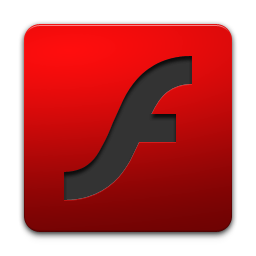 It is with mixed feelings that we announce the retirement of our beloved ImmGen Flash interface.

Over the years, Flash has jazzed up the ImmGen website, providing dynamic and colored displays to the early databrowsers. Flash is unfortunately being phased out. For those nostalgic ImmGen users, we have left a small taste of the good old Flash in the Constellation databrowser, but this will also come to pass, alas...

During the pandemic, Immgen programs are naturally slowed down.
To support COVID-19 research worldwide, we are re-deploying here some of our visualization tools to display datasets related to SARS-CoV2, the pathology or the immune response it elicits. 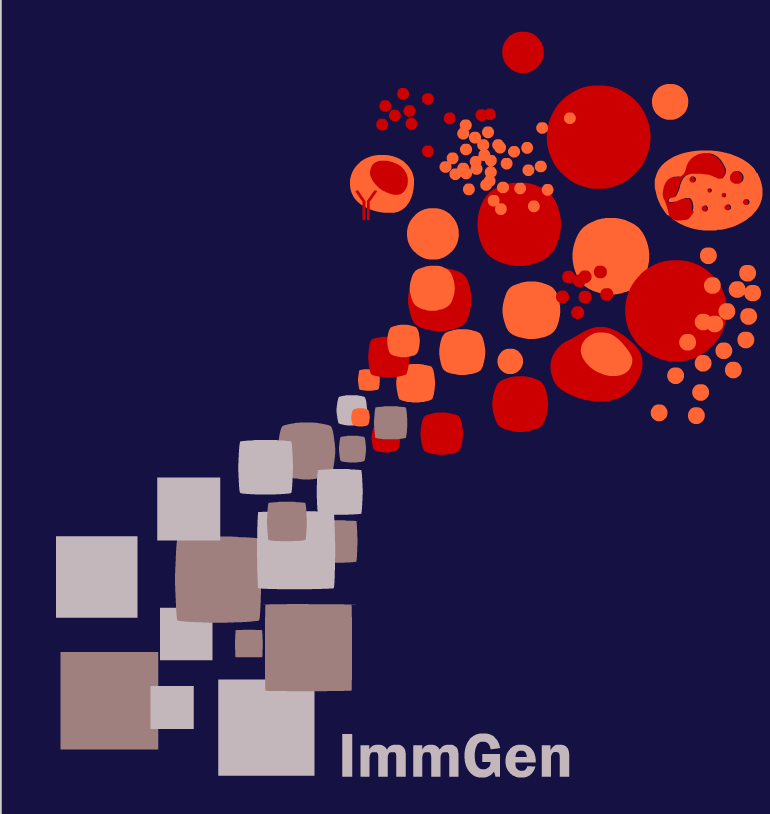 The Immunological Genome Project hosted its annual Workshop on Dec 6.
As usual, ImmGen Participants braved the Boston weather and came to meet new members, discuss recent findings and share their thoughts about the Consortium's possible future directions.
This year's T-shirt is sure to become a collector's item.

A series of new tools, developed by Eunice Esomonu and Liang Yang are now available through the databrowser page.

This new online tool is an extension to the article “cis-Regulatory Atlas of the Mouse Immune System” published by Yoshida et al in the February issue of Cell, which describes a matched epigenome and transcriptome analysis in 86 primary cell-types spanning the mouse immune system.
This work resulted in the description of 512,595 Open Chromatin Regions accessible in one or more immune cell-types, and in strong predictions of the transcription factors likely (by presence of DNA motif and correlated expression) to control the activity of each OCR. 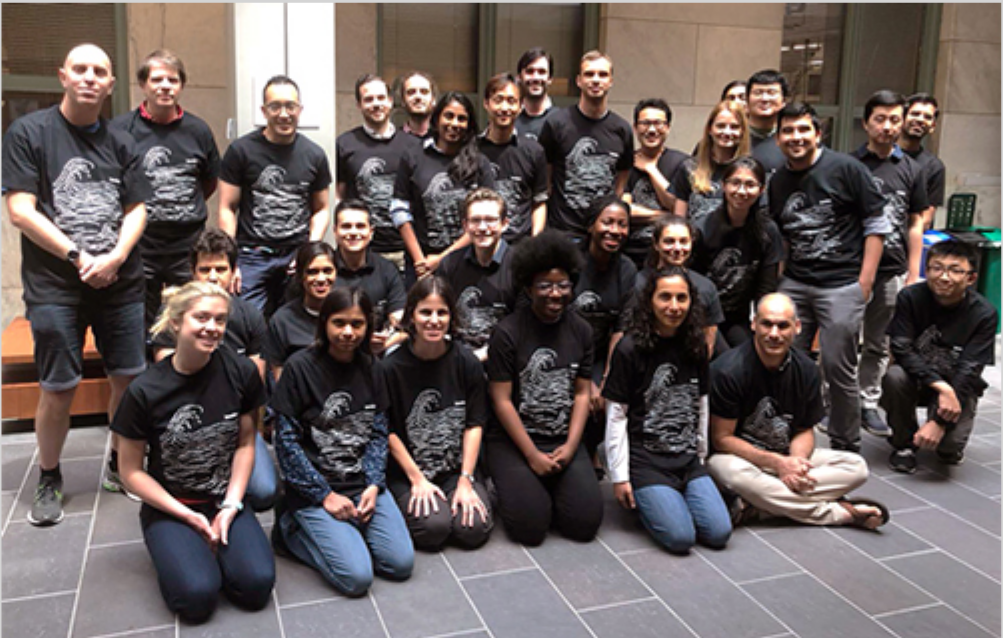 Organized by Tal Shay and Sara Mostafavi, two days of exciting presentations on cutting edge approaches to understanding cells and their regulatory networks, brainstorming on how these could be applied to ImmGen data or questions, or how ImmGen could tailor some of its profiling to dovetail with computational needs.


June 2019: Population comparison: The RNAseq version is OUT!: 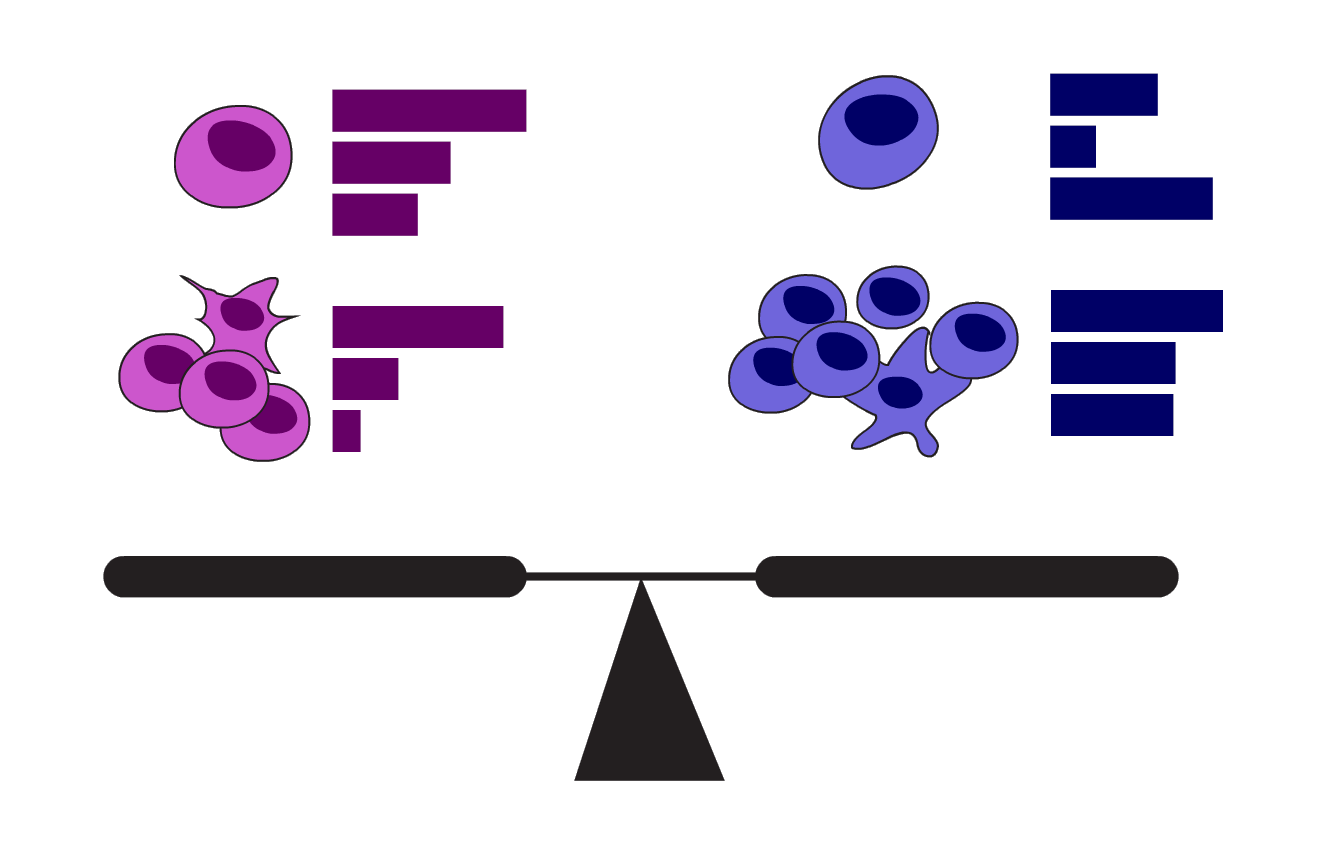 Thank you to the patient ImmGen user (you know who you are) who pushed us to move this upgrade up the priority list.

As previously, the “Population Comparison” databrowser compares gene expression between cell-types and returns a table of the most differential genes. Can be used for a simple pairwise comparison (e.g. Follicular B vs GC B cells) or for comparison between groups of populations (e.g all CD4+ T vs all CD8+ T cells), and either the new RNAseq or the older microarray data can be consulted.